I’m with the media – in case you didn’t know. 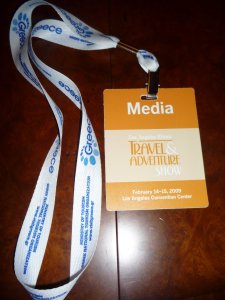 “Can you tell me where to go?” I asked the man wearing the badge at the Los Angeles Times Travel Show. We were in the lobby when I handed him a printed out receipt. “I’m not sure where to check-in.”

He stared at the receipt. “Are you with the media?”

Badge Man continued to stare at the paper he held in his hands, and then he looked at me. “You don’t know?” he asked as if I should know.

Honestly, I really didn’t know, so I said, “I could be with the media but I’m not certain,” because I wasn’t, but when he looked at me funny I laughed, and then added, “It’s just that I don’t feel like I’m with the media, but I do write a column online?” It was a question, not a statement. “Galley Gossip,” I added. Like he would know.

“Is she with the media?” asked another man standing nearby. This man looked a lot like the man who was still holding my paper, only he was bald and twenty years older.

This went on and on until they both gave up and told me to take the escalator upstairs where those who were with the media could skip the long line and check-in. 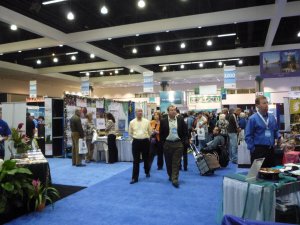 I could feel my heart beating as I walked into a small room filled with people and handed a woman my receipt. “Is this where I need to be?” I asked hoping it was exactly where I needed to be.

Turns out it was where I needed to be. That’s right, I, Heather Poole, am a flight attendant / mother / writer / Bollywood movie extra / and now a media person – and don’t you forget it! (Please, please, please, don’t forget it.)

Imagine my surprise when I got to wear not a blue badge (exhibitor), not a green badge (travel agent), but an orange badge, the one with that one little yet oh so powerful word written in white across it – MEDIA. Don’t think I didn’t notice others checking it out. At least I hoped they were checking it out. Okay fine, I wished they were checking it out. It’s not everyday a person like me gets to wear such a thing. When I’m at work I wear flammable polyester. When I’m at home I wear yoga pants. Honestly, the moment I got that badge in my hands I could have left the show right then and there and it still would have been one of the most exciting days of my life.

As I let it all soak in, the royal treatment began. A woman shook my hand, another woman asked for my business card, and a man took my photo. Someone, I’m not sure who, handed me a folder full of information on the show. Coffee and cookies were served in the corner. What more could a girl want? Except for another Media badge, of course!

The travel show was a lot of fun. I finally met Grant Martin, my “boss” over at Gadling.com. He’d flown in for the special event the night before. That’s him over there on the left trying his best to avoid the one in feathers. It wasn’t easy. The two of us walked around, collected pamphlets, and we both won an airplane model just by spinning a wheel at the China Airlines booth. Talk about lucky! Then we took in a discussion about the online travel industry hosted by a few very important people in the business.

That’s where I met Johnny Jet. He has a website that was voted the best travel site for budget travel. After I shook his hand and told him I wanted to interview him, he asked me if I wanted to do lunch (umm…Yes!) Turns out we live in neighboring towns. Next up was Jen Leo. She works for the Los Angeles Times. I gave her my business card just in case, ya know, she needs a quote from a flight attendant for one of her news stories or maybe she just wants a flight attendant to write one of her news stories. Hey, you never know! Jen is also known for her Sand in my Bra series, a book of travel essays I not only read, but would love to contribute to if there’s yet another Sand in my Bra in the works. (Hint Hint). Hey, a flight attendant can always dream!

Just when it couldn’t get any better Greg Damon called. He’s the radio show host of Greg’s Garage. Imagine how cool it was to excuse myself from those amazing people mentioned above so I could find a quiet corner and do a phone interview for Greg’s show! Yes, I did actually feel a little bit like Carrie Bradshaw (minus the cool clothes) for a split second. Greg and I spoke for about half an hour and I even took a few calls from listeners. Talk about fun. I can’t wait to do it again! 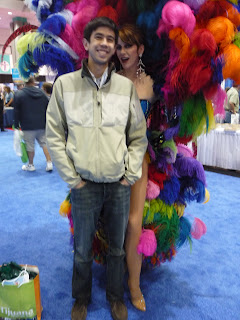