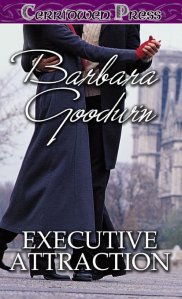 Today on GALLEY GOSSIP I interviewed author / flight attendant Barbara Goodwin as the flight attendant of the month. If you haven’t read the interview, you really should because I’ve never heard a worse “worst ever trip” story! And she’s still flying!! Just to goes to show how much we love our jobs. In fact, she loves her job so much she’s written about it – TWICE. First she wrote about a flight attendant in the book Hiding in Plain Sight, which I’ve read and can say is a very good book, and again in her upcoming novel Executive Attraction….

Who would have thought a freak spring snow storm in New York would bring twice divorced flight attendant Jillian Stanton the man of her dreams? And who would have thought she’d make a fool of herself when the man pulls her off balance and she slides down the front of his pants her face stopping just above his crotch?

Handsome Vice-President Bill Cole is intrigued by the clumsy beauty. Can the airline executive, who wants to cut Jillian’s pay and benefits, find a way to pierce her heart? Or will Jillian’s tough outer shell be too thick to crack? When Bill rescues her from a man with a knife will Jillian open her heart to love and passion? Can she accept his position at her airline as the chief negotiator intent on gaining more wage cuts from her already strapped flight attendant corp?

Flying between New York and Los Angeles, Jillian ignores the electric sparks swirling between them and pushes away the handsome stranger. But home, in Orange County, California, Bill won’t allow Jillian to ignore him. Come fly with Jillian on the adventure of a lifetime!

Looks good, Barbara! I expect an autographed copy. Don’t forget, Barbara is not the only flight attendant writing about flight attendants! Check back tomorrow and read Chapter 1 of my novel (a work in progress) Skydoll: Love and Sex at 35,0000 feet.