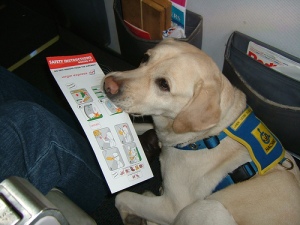 I’m all for emotional support animals on board when it comes to calming passengers who suffer from anxiety. What I have a problem with are passengers who bring their pets on board and then claim they are service animals in order to keep them on their laps. Don’t get me wrong, I like animals. I really do. I have one at home. His name is Gatsby and he’s a seventeen pound Maine Coon cat. But not everyone on the airplane gets excited about sitting next to the passenger who has a dog wearing a dress on their lap. A lot of people are allergic to pet dander, so it’s my job to remind passengers that their pets must remain inside their carriers during a flight. The only pets that are allowed out of the carrier (on my airline) are celebrity animals (for real) and service animals. That’s it. Case closed.

While doing a little research, I came across an interesting bit of information. “Did you know there are horses that are considered emotional support service animals?” I asked my mother who is also a flight attendant for the same airline I work for.

“Not horses. Small ponies,” she corrected. Before I could even comment, my mother who was now laughing said, “Hey, I have an idea. Why don’t you call a couple airlines and tell them you’d like to bring a small horse on board in main cabin. See what they say.”

Recently during boarding on a flight from San Francisco to Chicago, I walked into the first class cabin and spotted something I could not believe. On top of a tiny petite woman sat the largest emotional support lap dog I’d ever seen. Shaggy and well-behaved, he was almost as big as the owner who did not have the proper paperwork to prove that the dog was in fact allowed out of its carrier. Oh sure the dog was cute, but half the cabin claimed to be allergic to it and no one wanted to sit by it. Finally, when it became apparent that we weren’t going to depart until the situation had been sorted out, a man reluctantly agreed to sit by the oversized, but very sweet, dog. Eventually an agent appeared who confirmed he had seen the dog’s paperwork, and then quickly he shut the aircraft door and waved goodbye.