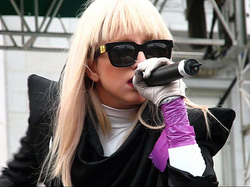 It’s an FAA violation to interfere with the duties of a crew member. So please, for the love of Gaga, when a flight attendant asks you to get undressed, get undressed! And don’t argue about it.

Recently on an eight hour flight from London to New York, Lady Gaga’s legs began to swell due to the restrictive clothing she wore on board. According to The Sun, when she began developing early signs of deep vein thrombosis, the cabin crew asked Lady Gaga to change out of her clothes – black and yellow tape – as well as a pair of blue platform shoes. Apparently LG was miffed about ditching the heels designed by an old pal, the late Alexander McQueen, which she wore in honor of him.

Am I surprised by any of this? Not at all. Crazy Gaga has been quoted saying she would rather die than have her fans not see her in a pair of high heels. Well the woman almost got her wish. Obviously Miss G does not realize just how serious DVT is, especially when wearing uncomfortable duct tape with snug platform shoes on a long haul flight!

I’ll admit it, I’m a pretty big fan of the recording artist, so I’m quite familiar with her theatrical taste in fashion. And the thought of Lady G actually donning a pair of synthetic, airline, knee-socks is just not right. But research has shown that wearing flight socks can reduce the risk of developing DVT by 90%. Don’t gag, Gaga. If anyone can make an ugly pair of compression socks look sexy at 30,000 feet it’s you! ….