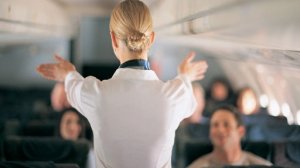 This post originally appeared on Good Morning America / Yahoo News to coincide with my interview on ABC.  Morning show host Lara Spencer seemed a little disturbed by #4.  Wonder if Robin Roberts took my book with her on her flight..

1. You can keep using your cell phone. The reason we’ll never tell you this is because you can’t. Oh, I know you think you can. Regardless of what Myth Busters “proved” or what the New York Times printed last week, turning your cell phone off is the law. We can actually be fined (personally) by the FAA for not enforcing the rule. So unless you want to pay that fine for me, and then employ me, turn it off!

2. You get fewer options if you’re at the back of the plane. This shouldn’t be true — you’ve paid for the same ticket as everyone else — but it’s simple math. If we only have 55 Diet Cokes for 160 coach passengers, and we’ve used them all up by the time we get to your row, there’s nowhere to restock at 35,000 feet. But look on the bright side: You were one of the first passengers to board the flight, so you probably found an open bin for your carry-on, which is not always the case for those sitting in the first row drinking their beverage of choice.

3. Sure, we can change the cabin temperature. Some people run hot, some run cold — it’s impossible to make everyone happy. There’s no way we’re going call the pilots every five minutes to warm up the cabin and then cool it down. If you complain about the temperature, we might tell you we’ll have the captain adjust it. But unless the entire plane complains, or the crew is uncomfortable, it probably ain’t happening.

4. Stay warm with an airplane blanket. Now, I’m not saying anything specific here, but if I were you, I’d wrap up in a sweater or coat. That’s what a flight attendant would do. And I definitely wouldn’t put one of those blankets anywhere near my face. The pillows? Well, I haven’t seen one of those in years, but I do remember people used them for the darndest things. (Note: Flight attendants alone probably keep Purell in business.)

5. You want the chicken entree, no garlic? No problem. Planes are not restaurants. As much as people like to think so, we’re not waiters. Keep in mind we have one oven to heat up more than 30 meals in business class. You don’t have be from CSI to realize you’re basically eating a TV dinner that’s been prepared in a toaster oven.

6. It’s against the law to join the mile-high club. Because it’s not! That’s the good news. The bad news is it’s against the law to disobey crew commands, so if we ask you to stop, by all means stop!And come out with your pants up. Then everything will be A-OK, and you won’t have to tell your cellmate what you’re in for.