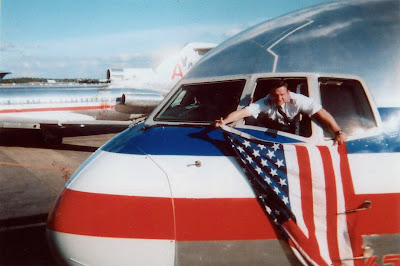 On that day, September 11, 2001, I landed in Zurich, Switzerland, where I spent the next several days trying desperately to get back to the United States. When I did eventually get back to work in October, things had changed, and they had changed drastically. Here’s an excerpt of my post, 9/11- That Day (plus a chance to win the book Reclaiming the Sky) on GALLEY GOSSIP…

…Eventually I did go back to work, back to New York, less than a month after that day in September. I’ll never forget the smell, as it lingered in the air, strange and unexplainable, for months. And whenever I’d return to my crash-pad in Queens after a flight, I’d step out of the car and onto the curb, only to be greeted by stacked cardboard moving boxes. Japan, several boxes were labeled one particular afternoon. Most likely belonging to the opera singer living at the end of my hall, because shortly after that, the hallway became eerily quiet. (I still miss her beautiful voice.) As people left New York in droves, and the odd smell refused to dissipate, my colleagues continued to go to work, back to the airport, back on the airplane, back to where it all started on that day in September.

“Remember the soot on our windows in the apartment when we got back to New York?” my mother said after I read the first part of this post to her over the phone. “And the memorials set up for our coworkers in Operations?”

As my mother reminded me of all I could not remember, of what I did not want to remember, a chill went down my spine. What I do remember was flying into New York, the airplane low over the city, the passengers glued to the windows as they looked out to where the Trade Center had been, a dark hole on the ground that continued to smolder for far too long.

“I often wondered if the pilots were tipping the wing of the airplane in the direction of where the Trade Center had been in respect to what had happened,” my mother said.

On the jump-seat I sat on my first trip back, minutes after takeoff, when the flight attendant sitting beside me asked, “What are you going to do if something happens?”

“What do you mean?” I asked, knowing full well what he meant. It’s just I didn’t, at the time, have a plan. I mean I had a few ideas of what I could do, but I didn’t know exactly what I would do, if, in fact, it came to that. God how many times did I pray sitting on that jump-seat after takeoff that it would not come to that!

“Here’s what I’m going to do,” said the flight attendant as he motioned to the insert of soda sitting on the linoleum floor beside his jump-seat. He grabbed a can of Pepsi and made quick and aggressive throwing motions. “Bam! Bam! Bam!”

Soon after that, every flight attendant I met had some sort of plan, each plan more original and ingenious than the next. My weapon of choice, a can of soda inside a long sock that I would swing if anyone tried any funny business, I kept hidden behind the last row of seats in whatever cabin I happened to be working that day.

There were times, only a few, when strange things did happen on-board my flights, and I remember wondering if what was happening was really a “test run” for a future attack. And there were other times, only a few, when passengers would do things, very strange things, to take advantage of the situation that had developed on that horrible day. One of those times included an elderly gentleman, a Koran, a book of weapons, and an intense stare full of hatred. We, the crew, decided to ignore him.

One passenger we chose not to ignore walked on-board the aircraft – not a couple of years ago, but just last week, causing Heather, my coworker, to say, “There’s a guy seated in the first row of coach who gave me chills.” We were flying from Los Angeles to New York. “It looks like he might be traveling with three others because he keeps making eye contact with one in business class and one in the back of coach.”

To read more go to Gadling.com and read GALLEY GOSSIP

Yeah, that's me, the one standing in the aisle wearing flammable polyester... View all posts by Heather Poole

BUY ME A LATTE

Buy me a latte