A question about turbulence and being scared at work 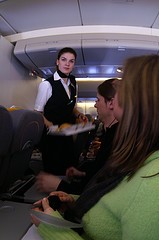 Hi Heather,
Are you ever afraid to fly? Or were you in the beginning of your career? I have recently been invited to training for a FA position with a major airline. It has been a dream of mine my whole life! I am so excited….however….sometimes I am nervous to fly! I fly A LOT. Usually a few times a month. Sometimes I am perfectly fine, and other times I am nervous. I’m worried about this and wondering if you ever felt this way?
I was on a flight last month from MCI to SMF with a stop in DEN and within about 3 minutes of take off we hit severe turbulence. I have never felt turbulence that strong before and neither had my husband who also flies at least once a week. We had the whole zero gravity thing going on, the plane was actually rolling from side to side and I’m positive that if someone hadn’t had their seat belt on they would have hit the ceiling. I mean, it was pretty darn scary! After we reached altitude and smoothed out I went to the back and talked to the flight attendants. One of them told me that it was probably one of the roughest take offs she had ever experienced. I know it’s not common but I was terrified!
Well, thanks for any advice. I WANT to do this, I just want to make sure that I’m not going to be scared at work everyday!
Leesa
Leesa,
Congratulations on getting hired with a major airline! Flight attendant training is not easy. A lot of information will be thrown at you all at once. There will be late nights, early mornings, and lots of caffeine, but whatever you do, don’t get tired and quit! It’s going to be the longest seven and a half weeks of your life, but you’ll be glad you did it when those silver wings are pinned to your blue lapel.
As far as turbulence at work goes, the only way you’re going to know if you’ll be scared or not is to go to work and test it out. If you are scared, I’d give it a few months, or as long as I could take it, just to see if flying is something I could get used to. Worst case scenario is you’ll have to quit. So what. At least you gave it a shot, gained an amazing experience, and won’t spend the rest of your life wondering what could have been if you’d given it a shot. Being a flight attendant is a great job, but it’s not for everyone.
Thankfully severe turbulence is rare. I’ve only experienced it three times in my fourteen years of flying. When you go through training, Leesa, you’ll learn all about turbulence, the four different kinds (light, moderate, severe, extreme), and how you should always take care of yourself first, which means sit down, fasten your seat belt, and worry about the beverage service later!
Continue reading GALLEY GOSSIP: A QUESTION ABOUT TURBULENCE AND BEING SCARED AT WORK