Too Hot to Fly 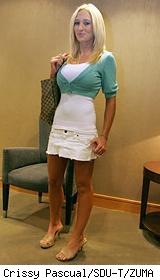 Me, I’m too tired to fly. Seriously, I’m all flown out. And with the threat of reserve coming up in October, I’ll do anything humanly possible to keep my scuffed up Mary Jane’s off the airplane. That’s why I just mailed a $50 check to a fellow flight attendant, paying her to work my trip to Seattle this weekend. The husband is out of town traveling on business – again, and munchkin is actually sick – again, with a runny nose and a busted lip due to a scary fall, which means someone has to stay home. I’m glad it’s me. But this girl, the one in the picture, that one right over there wearing the itsby bitsy teeny white skirt, well she, believe it or not, is just WAY too hot to fly. I’m not kidding. Southwest Airlines came close to kicking her off a flight recently. Though she remained in her seat, she was asked to cover up, and did so with a blanket. No joke. That young woman was actually harassed by the airline for being scantily dressed, when millions of Americans fly every single day sloppily dressed. Personally, I’d keep sexy over there and kick off a few of the ones walking around on the frayed nasty carpet with bare smelly feet. Take it from me, a flight attendant for a major US carrier, that’s not water you see on the bathroom floor. And it’d be nice if you’d (you know who you are) drop your disgusting feet from the bulkhead wall so I can lean over and pass your seatmate a drink without getting a whiff. Look, it’s not that I think what she’s wearing is nice. I don’t. I wouldn’t wear that outfit in a million years. And one of the many reasons I wouldn’t wear it is because I couldn’t wear it if I tried. Imagine being so sexy you are not allowed to fly. Honestly, I may be a little jealous of that woman and her skin tight mini. I mean I wish I had those kind of bragging rights! Lucky bitch. There never seems to be an end to these kind of crazy airline stories. Which is good for me. And the blog. Check it out.
http://video.aol.com/video/news-mini-skirt-gets-grounded/1969002